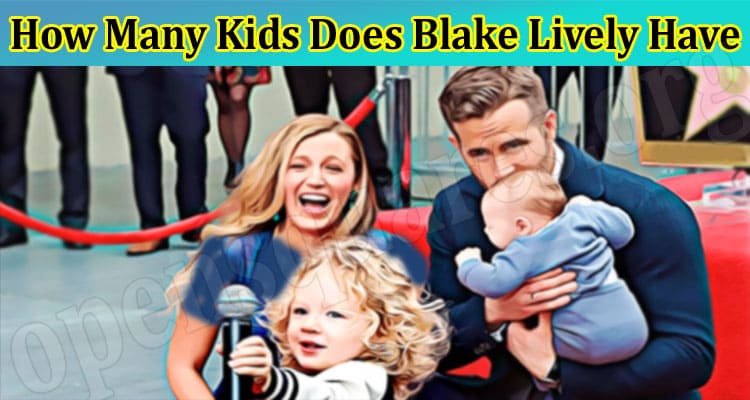 How Many Kids Does Blake Lively Have? Find answers to all your questions related to this famous Gossip Girl Star.

Did you hear the latest news on Blake Lively’s pregnancy? The Gossip Girl Star celebrated her 35th birthday last month and is now said to be expecting another child.

Blake Lively and Ryan Reynolds give those couple vibes to all. One born in the United States and another born in Canada, the couple has been married for almost a decade now, and we can’t get enough of the two. Their unique and caring nature for their family always amuses the Internet. How Many Kids Does Blake Lively Have?

Blake Lively and her children:

The couple has been very private about their children’s lives as they want them to grow as normal children. They would not reveal their third daughter’s name until their close friend Taylor Swift named the characters in one of her songs after their daughters.

The couple has been married for a decade and is now expecting their fourth child. Yes! Blake Lively is pregnant. She appeared at the 10th Forbes Power Women’s Summit on 15 September 2022, where she was honored.

She wore a beautiful long-sleeved sequined mini dress and showed off her baby bump. She did not make any official statement, but sure shot knew the best way to announce her 4th pregnancy publically. Fans and the public are going in awe as they hear the news.

Blake Lively and Ryan Reynolds make a lovely family as they wed in 2012. Blake Lively Children live privately as their parents protect them from the outside Internet world. James is now 7 years old, Inez is 5, and Betty is 2 years old. And we are as excited for their fourth child as their fans are.

Blake Lively, born on 25 August 1987 in Los Angeles, is a well-known American actress. She has been known for her roles, like Serena van der Woodsen in Gossip Girl, Adaline in the film The Age of Adaline, and more.

She also appeared alongside Ryan Reynolds in Green Lantern, Ben Affleck in The Town, Anna Kendrick in A Simple Favor, and other critically acclaimed films.

How Old Is Blake Lively? She turned 35 last month, which she celebrated with a trip to Disneyland with her sister. She has won various accolades like the People’s Choice Award, Teen Choice Award, Critic’s Choice Award, and more. She debuted as a director with Taylor Swift’s song “I Bet You Think About Me” music video. The video was nominated for an Academy of Country Music Award.

Blake Lively and Ryan Reynolds are always in the news whether they posted something or made a joke about each other on the Internet. And as she announced her fourth pregnancy, people asked How Many Kids Does Blake Lively Have. Don’t worry, as you will find all the answers above.

Do you also love this sweet couple? Let us know in the comments!