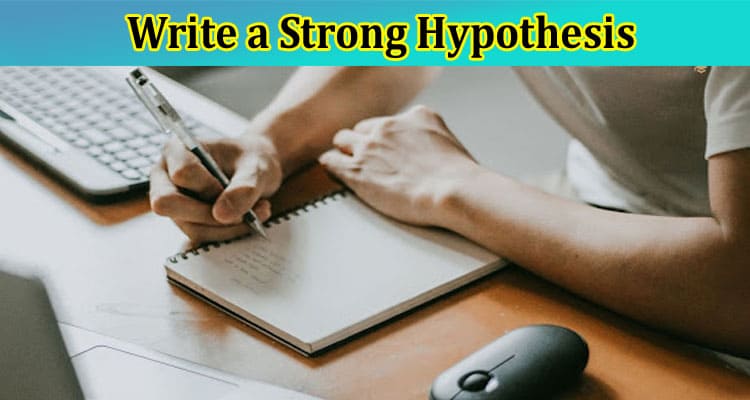 You’ve started a new research project and have an idea for the topic you want to explore. Now comes the hard part: writing a hypothesis. A hypothesis is a tentative statement about the relationship between two variables. The purpose of a hypothesis is to generate new questions and predict outcomes that can be tested through experimentation or observation.

Writing a solid hypothesis is critical to any scientific experiment or research project. It is the statement that serves as the foundation for any scientific research. But how do you write an excellent hypothesis? Crafting a research hypothesis can be challenging for many students, but it doesn’t have to be.

This article walks you through the steps and examples of how to write a strong hypothesis. And if you are overwhelmed by assignments and need an expert to “write my research paper for me,” you can get professional help at studybay.com.

The first step in formulating a research hypothesis is to ask a question about a topic that interests you. This question should be specific and focused and address a gap in the existing knowledge or understanding of the topic.

Example of a research question: “Does the use of technology in the classroom improve student learning outcomes?”

Step 2. Do Some Preliminary Research

As you conduct research, you will identify theories and potential relationships between variables and inform the development of the hypothesis. You can also create a conceptual framework to follow throughout the research.

The initial research is thorough and unbiased so that you can craft a valid and reasonable hypothesis. Additionally, it is vital to identify the limitations of the existing research and how you can address them in your study. Once the preliminary research is complete, you are in a better position to craft a hypothesis that accurately reflects the research topic.

It is critical to refine your hypothesis and ensure it’s concise and testable before proceeding with the study. You want to be sure it has the independent and dependent variables, the group under study, and the expected research outcome.

Example: Hypothesis:  The use of technology in the elementary school classroom improves student learning outcomes.

If elementary school students use technology in the classroom, their learning outcomes will improve.

You can also use correlation to directly predict the relationship or the effect you expect between the variables.

Example: The use of technology in the classroom positively impacts student learning outcomes.

Also, you can state the difference you expect to find between two groups within the target population.

Example: Elementary school students who use technology in the classroom have better learning outcomes than those who don’t.

There is no significant relationship between the use of technology in the elementary school classroom and student learning outcomes.

What Can Proofreading Do for Your Paper?

Proofreading is an integral part of the writing process that can significantly improve the quality of your paper. It can help you catch any spelling, grammar, punctuation, and sentence structure errors you may have missed while writing. Also, proofreading can help you improve clarity and readability and identify any areas of content that may need further development.

Additionally proofreading ensures that your paper follows the formatting guidelines for by your professor. By taking the time to proofread your paper, you can ensure that your writing is of the highest quality and effectively conveys your message. Better still, you can hire an expert to proofread and edit your paper before submission.

Below are hypothesis examples.

What Is the Hypothesis of a Research Paper?

The hypothesis of a research paper is a testable prediction about the relationship between variables. It guides the direction of the research and helps the researcher to answer a specific research question.

What Is Hypothesis Testing?

Hypothesis testing is a statistical procedure used to determine whether a hypothesis about a population parameter is true or false. It involves comparing the observed data to the expected data based on the hypothesis.

What Are Null and Alternative Hypotheses?