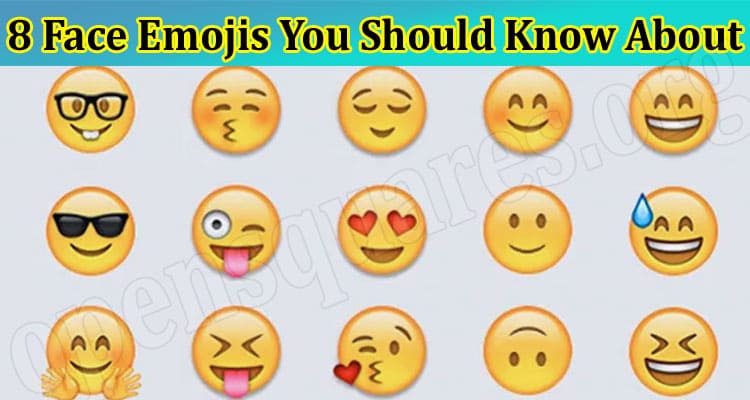 There is a wide variety of emojis, including pictograms, smileys, logograms, and ideograms. Everywhere you go, you’ll encounter emojis, and the variety of emojis grows as the digital language evolves. Everyone has seen them on television, in print ads, and everywhere else. You can find emojis around these days, and people love using emojis on social media.

Emojis are symbols that allow users to convey their emotions in text messages in any language they choose. So why are emojis so prevalent? Creatively, it’s a beautiful outlet. One of the most popular emojis on the Internet is the worried emoji face. In addition to smileys, emojis can also represent animals, cuisine, and even flags. Keep reading to learn about the newest face emojis to add to your messages.

When you’re crying and laughing simultaneously, this emoji is for you! It is still one of the most often used emojis to express a sense of humor or amusement. Overtaking the face with tears of joy was the face with a loudly weeping cry. People can interpret it as both a laughing emoji and a hilarious emoji. What makes this emoji unique among the rest? You’ll need a combination of laughing and sobbing emojis to make this. It was the most popular emoji on Twitter in 2015 and the most popular emoji on Apple devices in 2017.

It displays a pointer finger covering a person’s mouth with their pointer finger. There may be an individual piece of information that you need to keep secret, and the Shushing Face emoji will show that you mean business. Using the shushing emoji is a courteous way to ask someone to stop talking to you right now. When in a calm environment, you should not speak too loudly. The Shushing Face emoji is now fully certified as part of Unicode 10.0.

With this emoji, you can convey emotions like shock, astonishment, and wonder with the word “mind blown” as its inspiration. Express your amazement at the events of life with the Shocked Face with Exploding Head emoji. You can use this emoji to express a terrible migraine or splitting headache that is causing your head to burst, as this emoji is known to do. This emoji can also convey a wide range of emotions.

4 – Rolling on the Floor Laughing

It’s a common misconception among certain users that the classic emojis “laugh” and “lol” stand for “rolling on the floor laughing.” Some applications and devices show this emoji laughing on the left side, but it is laughing on the right. It was added to Unicode 9.0 and Emoji 3.0 in 2016 as ROFL, or Rolling on the Floor Laughing.

5 – Face With Symbols on Mouth

These white and black symbols covering the mouth of an angry red face indicate that it is cursing or misbehaving in this emoji. When we’re annoyed by something in a message, this emoji perfectly captures our mood. It’s also acceptable to use this angry emoji as a non-response. The Swearing Emoji and the Cursed Emoji are two more names for this sign. In 2017, the Unicode 10.0 standard added Face with Symbols on Mouth. Serious Face with Symbols Covering the Mouth is another name for this design.

Perspiration does not seem to be a synonym for joy or laughter in the context of this emoji. This expression of relief arises following a difficult task or an unexpected scare. The emoji frequently appears in pranks among friends, especially lightheartedly. When Unicode 6.0 became the standard in 2010, it brought a new set of emojis.

An emoji depicting a person crying, with tears streaming down their cheeks, their mouth open as they lament, and their eyebrows furrowed, is known as a “loudly crying face.” It can also symbolize feelings of joy, such as irresistible laughter. Unified 6.0 and subsequent Emoji 0.06 included this icon as part of the Unicode set in 2010. All other social media platforms use it frequently, with Twitter being the most popular.

8 – Face With Hand Over Mouth

You’ll likely use this emoji if you’ve received a message that has startled you. Using the hand-over-mouth emoji, you can convey astonishment and surprise. Additionally, senders frequently use this to imply malice or keep their identity secret. Some platforms may display the emoji differently. There are wide-open eyes on Apple and Facebook, but happy eyes and blushing cheeks on Windows, Google, and Twitter.

This emoji can help you communicate your message more effectively while also adding fun to your interactions by using relevant emojis. It’s becoming increasingly popular for people to use emojis to communicate digitally with friends and loved ones and create deeper connections with others. We’ve compiled a list of the most common emojis that might be hard to understand.