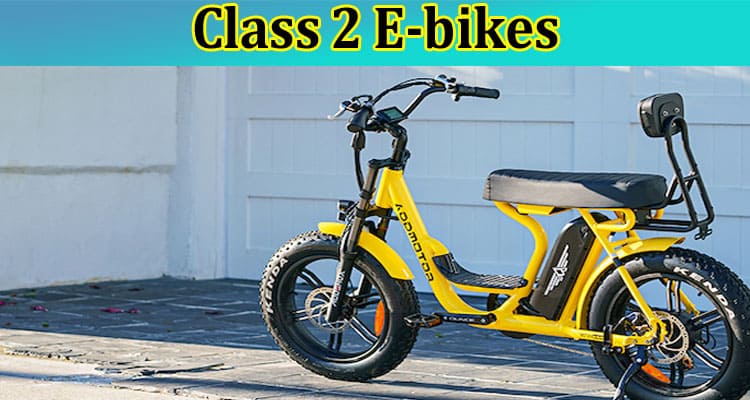 If you are a rider you probably already know that ebikes in USA are categorized into various groups, namely; class 1, 2, and 3 e-bikes. This is done based on various features that affect their performance. There are also different laws put in place to govern their use depending on the category that they fall under. For instance, the use of class 3 bikes is prohibited on some roads due to their high speed.  This article talks about class 2 E-bikes highlighting their features, benefits, and shortcomings.

What makes an electric bicycle to be considered a class 2 e-bike?

As mentioned before, categorization is done based on the features of the electric bicycle that have an impact on its performance. For it to be in the class 2 category it must have a throttle. Without this, it can be either a class 1 or 3. Though, some are hybrids and hence can be in both class 2 and 3 ebike due to the speed factor. This means that the throttle can be used to drive it up to 20 mph then afterward the pedals are used to take it up to 28mph. Thus it is possible for a class 2 bicycle to have both a throttle feature and pedal assist. This brings us to the next point that is equally as important.

What is the difference between Pedal Assist and Throttle Control?

As the name implies, pedal assist is a feature that allows powering of the motor when the rider pedals the bicycle. When this happens the motor provides electric assistance that makes it easier to cycle. The key point to note is that you have to engage the pedals first for the motor to provide the desired assistance. The system is fitted with sensors that will detect your pedaling and transmit signals to the controls. The two most popular ones used are the torque and cadence sensors. These advanced sensors are able to notice even minor details such as the force that you are pedaling with hence allowing the control unit to set the appropriate assistance required. If you pedal faster or harder the speed will increase up to a certain point.

On the other hand, throttle control is a feature that allows you to engage the motor simply by engaging the throttle. This can be done in different ways depending on the throttle system of the electric bike. Some have a switch or trigger on the handlebar that you can switch on while others require you to just grip and twist the bar. The controls also allow you to control how much assistance you want by setting the level. Once you engage the throttle, e-bikes in USA allow you to ride without pedaling if you choose to do so.

What are the pros and cons of Pedal Assist?

What are the pros and cons of Throttle control?

Class 2 E-bikes are known for their ability to engage the motor using the throttle. Since this is not dependent on pedaling it reduces the total amount of effort that you use when cycling. That being said, some of the e-bikes are hybrids and so you can decide to use either the throttle or the pedals to engage the motor. This improves efficiency and allows you to enjoy the benefits of both throttle control and pedal assist.